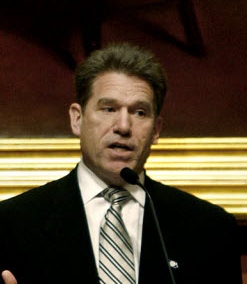 One advantage to having a high-profile recount in two straight elections: Minnesota’s voting systems have been scrutinized more than most. Minnesota Secretary of State Mark Ritchie, who presided over both the 2008 Senate and 2010 governor recounts, testified Thursday about the state’s voting system at a congressional hearing on improving elections.

Ritchie was one of two Secretaries of State asked to testify by the House Administration Committee. The hearing was held to examine “what went right and what went wrong” in the midterm elections, with House members most interested in ways to cut down on fraudulent voting. Calling Minnesota’s elections the “best system in the country,” Ritchie said it was important not to wait until after an election to invest in fixing problems.

He cited Minnesota’s use of change of address and Social Security electronic databases as one way the state has spotted problems before people begin casting ballots. Ritchie told of a Minnesota man on parole who illegally voted in the 2008 election, saying the goal was to cut down on those types of cases. “There’s just so many advantages to doing it up front,” Ritchie said. “It takes investment to do that.”